I’m sure if I asked you to recall a time you didn’t have enough of something, you’d come up with an example pretty quick.  I know I can!  It’s easy for me to think of times I needed more money, energy, knowledge, talent, time, and so much more.

I remember a specific time, though, when I wrestled through tears over the fact that we couldn’t afford to send our son to one of the colleges he was considering.  It was heartbreaking and devastating.  Fortunately, it wasn’t his top pick and he ended up going to a great school. But, you know, it didn’t matter, because the scar of scarcity had marred me once again. Scarcity is just one internal wound that I re-open every time I unknowingly convert an external situation into an internal beating that accuses me of not being enough.

Has that ever happened to you?  Have you twisted a circumstance into an internal belief about yourself? I bet you have!  Most of us do it because we make the mistake of defining ourselves by our behaviors compared to social dictates. 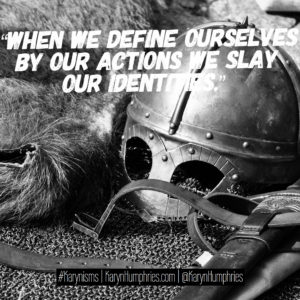 In our minds, not having enough money, energy, or time suddenly turns into the belief that we aren’t a good enough provider, parent, spouse, coworker, sibling, or friend. But can you see there’s a huge difference between something you did (or couldn’t do) and who you are as a person? It’s one of the finest lines in our psyche, but it’s critical to see that when we define ourselves by our actions, we slay our identities.

Not having enough money, time, or energy does not define who we are as a parent, spouse, co-worker, sibling, or friend.  Yet, we have this unhealthy habit of flipping the mental script and telling ourselves that it’s our behaviors and actions that make us unworthy or not enough.  Scripts like:

The list goes on and on and is a constant internal harassment.  I was tired of being harassed, but, honestly, even when I tried to combat these statements with counterpoints of I am enough (and provided verifiable proof), it fell flat, or was short lived. If we’re all honest, the I’m enough script doesn’t really work. I think it doesn’t work because, in some sense, we’re all still measuring ourselves against something. I don’t know what that is, but it leaves our best efforts impotent.  I was exhausted chasing after my good enough until I decided to do something radical….I embraced it instead.

I know embracing a negative thought like that is totally counter-cultural these days, but the hard truth is that we really are not enough. Just think about it; on our own, as humans, we are not enough because we each lack something. As much as we hate to admit it, it is the reality that we need to accept.  It feels awful to not be enough, I get it, I don’t like it either!  But no matter how much I strive, and even when I get things right, deep, deep down within me I know that I am not enough.  Somewhere deep down inside you, you know it too, and it plagues both of us.

This not being enough had its start in the Garden of Eden. The serpent was the one who pointed out that Eve wasn’t enough by suggesting that eating the fruit of the tree of knowledge would make her more like God, knowing good and evil. 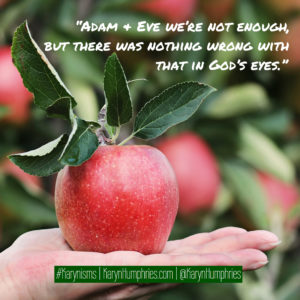 With her newfound understanding that she was lacking something, she checked out the tree and saw that the fruit was good for food and also desirable for gaining wisdom. (Gen. 3: 4-6).  Wanting more, Eve made that fatal choice.

So, as God’s created beings, designed to not be enough, the question I have is why do we make it bad to not be enough?  I think it’s because our culture drives this narrative.  From television to social media, we have thousands of fingers pointing to a shiny piece of fruit that we didn’t even know we were missing. 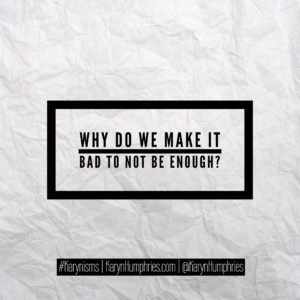 In our minds, being enough means that we are worthy to be here. It justifies our existence and leads us to a purposeful life. This is a powerful need that ends up waging a battle between the self and the soul. The self needs this assurance, but the soul knows the truth.

Our soul knows we are not enough and so does the Devil.  He’s still pointing at things that appeal to our self and helps us with that nasty conversion of actions into identity.    He tried it with Jesus in the desert, (Luke 4:1-13) and he continues this powerful deception today. He camps out and establishes strongholds with accusations about how insufficient we are as parents, spouses, co-workers, siblings, and friends, and we buy into it…unless we don’t.

In my wild-eyed search for the answer to this revelation, it didn’t take me long to see that God’s remedy for this is love. Even as Adam and Eve hid from Him, God sought them out with garments of skin to cover their nakedness. These garments were the first sacrifice for their sin and then thousands of years later He would send the final Sacrifice.  This is where it all comes together.

God didn’t design us or expect us to be enough. The entire Gospel is predicated on the fact that we are not enough… that’s the whole purpose of Jesus dying for us. Romans 5:8 says: But God demonstrated his own love for us in this: While we were still sinners, Christ died for us.

Many of us know this intellectually, yet we still exhaustively strive to be good enough. Whether it’s your personality (hand raised here!) or gratitude for Jesus and all He has done (hand raised again!), it doesn’t matter, because the truth is that we are only good enough because of Jesus. Our enoughness happens when we cover ourselves in His righteousness, by believing in Him.

Many of us know that too, but I don’t believe we raise the sword of the Spirit against the irrational beliefs that we carry that say otherwise. 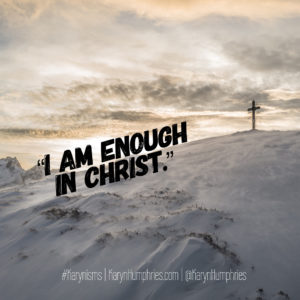 But when you truly give your soul license to say, “I am enough, in Christ” to any false allegation or derogative mental tape that runs through your head, you engage the supernatural and are no longer impotent.

We are not enough on our own, and that’s okay. It’s okay to embrace this because it’s actually a gift that opens the door to riches like humility, peace, friendship and dependence on God.  In that enoughness is the supernatural accommodation of the Holy Spirit, which is way more than any enoughness we can come up with on our own!

Not being enough is a gift that relieves us of the pressure to be perfect, to perform, and to put on the exhausting act for approval.  Enough in Christ sets us free from what the world thinks and gives us freedom in other things:

We are not enough on our own and it’s okay.  We are more than enough in Jesus Christ because that’s even better!  It liberates us from the exhausting existence of perfectionism, people pleasing, rebellion, and/or disconnectedness.

It also eliminates the breeding ground for judgement, expectations, control, and false pride. These boys pack a punch because we are, not only recipients of this burden, we are also carriers of the damage that it causes. We judge ourselves and others and we have expectations galore about the roles of a parent, spouse, coworker, sibling, and friend. These judgements, beliefs, and expectations are the contributors to the cultural narrative and we can be the ones to change it.  Once we embrace this belief and live with this freedom, we will have eyes to see and help others with the same burden. What’s even more wonderful is that when you accept this truth, you don’t lose anything, (except lots of stress) instead, you gain emotional and spiritual harmony:

This starts by knowing Christ as your Savior, the One who never pointed at the fruit, but instead 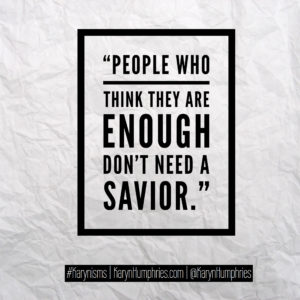 created a garden sanctuary with His presence.  We need His presence, because we are not enough on our own, and He’s okay with that because people who think they are enough don’t need a Savior.

I invite you to take this moment and fully step into the truth that it’s okay to not be enough.  As difficult and awkward as it is, just sit there for a bit and allow your soul to confirm this truth.  You are not enough, and it’s okay with God.  If it’s okay with God, it can be okay with you. Receive it and let it erase all the tapes in your mind that tell you otherwise.  Use Scripture to record new tapes that reassure you of the truth that you are enough, in Christ.  He’s got you covered with grace and offers so much more. You are His child, and in His everlasting, far-reaching love, He created you to be you, not Him.  So, be you as you were created to be.  Stop chasing fruit that the world points to and instead step into Christ’s presence and be covered with His enoughness.

What thoughts about your worth weigh you down?  How are they different in light of the revelation that you were not made to be more than just who you are?

Take time to actually do what the last paragraph of the blog says to do.  Journal your experience and give over areas of your self that tries to make itself enough.  Pray and ask if you need to ask forgiveness for trying to be God in these areas.

As a certified Life Coach I can help you move from where you are to where God wants you to be. If you are interested in growing more in purpose, and freedom from thinking you need to be enough, then let’s chat.  I’d love to be your champion in what God is calling you to do!