Skip to content
There has been a constant companion in my life, who I didn’t like much.  He’s cast shadows across my days since I was a toddler. He’s not a person. He’s an expectation of behavior that changes within cultures; a real moving target. He can be oppressive and stifle spirits, but he can also offer safety and security. “Just do as I say,” he entreats.  But when the person wielding him, doesn’t offer him in love, it becomes oppressive. It’s the person or institution who uses him that makes him either dangerous or helpful. He calls himself obedience and he’s a conundrum.
Obedience has taken on many shapes and forms in my life. As a child, I was supposed to obey my parents. This didn’t always happen. As an adult, I’m supposed to obey the law. With the exception of a couple traffic tickets, I’m a good citizen. As an adult Christian, I’m supposed to follow the religious law; the Ten Commandments, Great Commission, New Covenant law of loving God and loving your neighbor as yourself.  Hmmm, honestly, I think I do a better job driving.
Everywhere I look, it seems there is something I need to obey. Like a guardrail in my life, obedience has sometimes kept me safe, but other times when I refused to stay on the mandated road, I have done extensive body damage to my car.  Obedience has mangled aspects of me. He has shut me down. He has made me into a people pleaser. And, after so many side-swipes and close calls, he has succeeded in making me a rule follower. This unfortunately, elevates my own self-regard, which is a very dangerous thing because I come very close to being a Pharisee. See, I told you he was a conundrum.
He is defined as; compliance with an order, request, or law or submission to another’s authority.  Doesn’t sound much fun, does it? Doesn’t even sound loving! The concordance in my Bible has a column of Scriptures that feature him. When I look at the long list, that seem to wag its finger at me, I get stiff with indignation.  I feel cloaked in religion instead of covered by Christ’s righteous.
Years ago, a good friend believed God called their family to move out of state. She did NOT want to go, but surrendered to what she and her husband believed was God’s call on their life. Before they moved, in one of our last small group meetings, she sat uncharacteristically quiet. Just before she left she used the “obedient” word and you might as well have given her last rites. It sounded like a torturous submission, like she had no choice, like she was powerless. I was horrified!
Once moved I watched my friend struggle, but then eventually adapt.That was the beginning of a more intimate portrait of obedience for me. After some time, I realized that ripping her away from her community and family was tortuous, but she did have a choice, and she was not powerless. She chose to love The Lord who gave them the call to move, more than she loved her present life. She was being obedient because she could trust in someone greater than herself. Her response wasn’t motivated by religion, it was motivated by love. 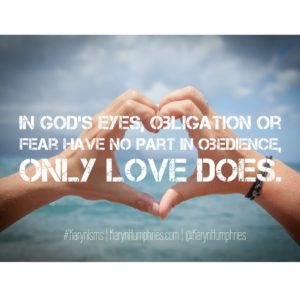 In God’s eyes, obligation or fear have no part in obedience – only love does. He sets boundaries for us because He knows what’s best for us. In a sin-laden world without guardrails, driving off cliffs is your alternative.
A long time ago while preparing a MOPS talk on The Five Love Languages, Jesus showed me that He had His own love language. I guess we don’t always think about that, at least I hadn’t, but when He gave me eyes to see this, it was a game changer:
John 14:15, “If you love me, you will obey what I command.”
John 14: 21, “Whoever has my commands and obeys them, he is the one who loves me.”
John 14: 23, Jesus replied; “If anyone loves me, he will obey my teaching.”
John 14:24, “He who does not love me will not obey my teaching.”
After repeating how we can love Him through obedience four times in ten verses, Jesus shows us how He modeled this:
John 14: 31, “but the world must learn that I love the Father and that I do exactly what my Father has commanded me.”
Love –> Obedience…, yeah this was a conundrum to me for sure!  So, what happens when something, that has been part of your entire life, suddenly has new meaning?  A concept that always felt heavy, suddenly turned from oppressive to desirous.  Yes, desirous! I can’t even believe I typed that word, but I really wanted to love Jesus in His love language. 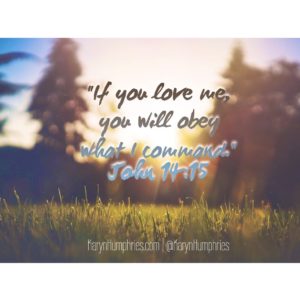 In the beginning how I felt when obeying, mattered less than the willingness of my heart to submit to my trusted Savior.  It wasn’t long before Jesus moved me down the path to a new obedience challenge. I was obeying, but I was putting my people pleasing self to work and became embroiled in the outcomes.  Everything had to be perfect!  This is where He told me to hold the outcomes loosely and leave them up to Him.  Oooh, this was tough to do, but I worked at backing off and focusing more on my “process”.  I can come up with a process for anything! I figured I’d handle that and let Jesus handle the outcome…, yeah – nope!
At one point, I felt the tug on my heart to connect women mentors with younger women. I didn’t even know where to begin. The logistics were mind-boggling. I felt a clear message to just assemble the mentors, without a plan! I rarely do anything without a plan!  But, God gave me the sense that the process would come out of the collective group and not just from me. I started with a couple mentor/mentee pairs and let them know that there wasn’t a formal plan. They worked out their own logistics and everything went well. God had it. He just asked me to make the connections.
Letting go of the process as well as the outcome was a huge step in obedience and self-discipline. The biggest surprise in all of this was that by doing so, I experienced freedom! It’s difficult to explain, but when God calls me to do something, He’s only asking me for my small part. He ensures me that He’s got the rest.
I’ve recently returned from a speaker and writer’s conference called She Speaks.  There was plenty of networking opportunities and every table I sat at had women who said they didn’t know why they were there, they were just being obedient to Jesus’ call. It was the majority of the women I encountered, and I was bowled over by the commitment they made to see what God wanted them to do with their precious stories of Him. It was truly remarkable. They were free from expectations and free from performance pressures, which freed them up to learn and fully experience the conference.
Stepping into obedience, without fixating on the outcome, or how it’s going to happen, ushers you into a spiritual freedom like nothing else. This type of obedience is motored by love that originates from a close relationship with Christ.  Remember when I said it depends on who is wielding obedience? Christ is the perfect example of who we can always depend on to transform our obedience into freedom. This is not a conundrum at all.  It’s God’s plan, demonstrated most visibly by His Son obeying, to the point of death on a Cross, so that we can experience that freedom! So, I encourage you to love Jesus in His love language and receive that special gift of freedom He has for you.

PONDER
What do you think about obedience?  What/who impacts your perception of him? Is he a friend, or foe?  What drives your obedience, fear/obligation or love?

–   Let go of the outcome?
–   Let go of the process?
–   Let God drive things?
WITNESS
Who demonstrates loving obedience best in your life?  Where do you see fearful obedience? What do you think about Jesus obeying, in light of the discovery that there’s freedom in obedience?

ACTION
Try this formula when you believe God is calling you to be obedient: