When you picture God, what do you see?

Whatever picture, thought or feeling you experience, potentially reveals inner secrets to your identity.

I recently learned this while being trained in Freedom Prayer.  The instructors had us close our eyes and asked us to create an image of God in our minds.  Some people saw their earthly fathers.  The image of my Heavenly Father was something like the old-time Santa with the long, white hair and beard along with the plush, red, velvet robe, trimmed in stark ermine.  The Scripture from Isaiah 6:1 came to mind, I saw the Lord, high and exalted, seated on a throne; and the train of his robe filled the temple.  My wacky, creative brain also saw one of His arms as a wing of a bird, much like Psalm 91:4, He will cover you with his feathers, and under his wings you will find refuge; his faithfulness will be your shield and rampart.  In that soft, feathery space was a promise of protection and love.

In the training they taught us that our relationship with God involves aspects of identity, protection and provision. However, for some of us, our notion of God is skewed by our experience with our earthly fathers.  That human relationship influences how we approach the divine relationship and ultimately how we see ourselves.

As the exercise continued, people were sharing how close their picture of God was to them, however for me, my image was about 300 feet away. (I credit my GPS for knowing that!)   I didn’t think much about it until I went on a private retreat a couple weeks later where I experienced a labyrinth for the first time. 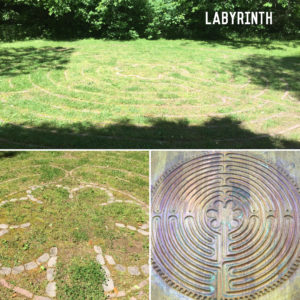 A labyrinth is not a maze, but a designed walkway of inlaid brick that is flush with the ground and has one entrance in and one exit out.  The narrow, serpentine path has you walking across the soft, natural surface of green grass with one foot in front of the other, in a posture of prayer and meditation.

I prayed before going in, not knowing what I could expect and it was there that the image of my Heavenly Father appeared, once again in the distance.  I always addressed God as my Heavenly Father without ever wondering why I called Him that, but it was in that moment that I realized how far away heaven was.  The expanse between me and heaven suddenly sunk my heart and stopped my feet in their tracks.  This meditative walk revealed my not-so intimate relationship with God as opposed to the intimacy I had with Jesus and the Holy Spirit. It was a startling surprise that uncovered buried clues that spoke to my identity.

The labyrinth meditation suddenly brought about surprising thoughts of my father.  I loved my Dad very much and considered myself very close to him while he was alive, however I could see, with each step I took through the labyrinth, that his words had shaped my identity in ways that also impacted my relationship with God.

My father’s voice came alive in my mind and I heard him say, “That’s not an A.” This was his regular response to my report card.  Now, with the exception of algebra, my grades were A’s and B’s.  He probably thought that he was spurring me on to excellence, instead he was actually turning me into a people pleasing perfectionist.  He was also very quick to point out imperfections, “You know you have a pimple on your nose?”  Any teenage girl is hyper-aware of any pimple on her face, let alone one that landed on her nose… of course I was aware of it!  My dismay about my pimple turned into shame every time he pointed one out.  Then there was this time, when I was a ‘tween’, that I was wrestling with him on the floor.  It was all good fun and something my sisters and I would do on occasion.  This time, in the midst of our laughter, he comments offhandedly about my changing body, particularly the area that makes a woman, distinctly female.  I immediately shrunk with shame and embarrassment and never felt comfortable with my body from that point on.

I became the tomboy of the family and often characterized myself as the son my father never had.  I was more comfortable identifying with my body as athletic instead of feminine and spent a lifetime torn between trying to deflect attention away from it and striving for acceptance because of it.  Being smart and athletic were the personas of choice.  But, try as I might to be more than my body, I couldn’t win because the voice of society joined in the chorus and the internal body image battle ensued.  I spent years hearing comments about my weight gain or loss.  Judgement was attached to each observation, carving deeper imprints of deficiency into my identity.  Approval became the quest of a lifetime, not only with my body image, but with my entire being as I strived to be enough for everyone.

Having so many experiences where I fell short of ‘me’ just being ‘me’, made ‘me’ not so comfortable with ‘me’.  As I worked to get approval from people, I also worked to get approval from God, and in my mind, I often fell short.  In the labyrinth, I realized that I had stuffed the space between us with the manufactured shame and disappointment I developed through the years.  It’s no wonder that I saw God at a distance. These deep, deficient blocks of my identity filled the sprawling chasm between us, even when I knew in my head that He loved me!

Intellectually I know that I am covered by grace, which makes me as much a saint as a sinner.  However inwardly I got that all twisted up through misunderstandings, deceptions and a constant chorus of “You’re not enough,” from the world.  However, when God’s truth rings louder than the world’s clamor, I can see that He designed my body, mind, heart and soul in a way that delights Him.  Within the labyrinth, with each prayerful step, I was overcome with assurance and comfort that my God drew my eyebrows, formed my nose and sculpted my limbs with meticulous care.  More than anything was the assurance that He knows me through and through, and loves me all the more.

I struggle less with body issues these days, but if I’m honest, there are scars that tattoo my identity and cause me to be defensive or over-protective.  I feel like this when I make a point of complimenting young girls on something other than their looks, or when I correct my husband for commenting on someone’s weight loss.  But there are times I fall into the trap too. I just caught myself telling two new moms how good they looked, and even though it was an encouragement, I felt like my voice had joined the world’s chorus on how a woman’s body should look. Uuugh! Major fail!

When I find myself falling short and messing up (like I did with those moms), I wield my new skill of self-compassion. Self-compassion dismantles my critical spirit and preserves a healthy self-regard. It is a tonic for the soul, especially for perfectionists!  When applied with God’s truth there really isn’t anything more powerful that will align me with God’s love. 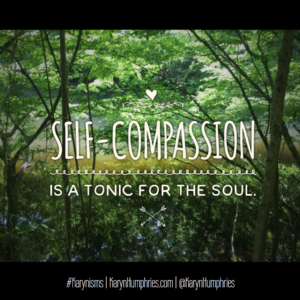 Through the years my self-regard took a pounding from the world, and the unintentional comments of a father who never imagined his words would cut so deep.  I am now a middle-aged woman, (with a pimple on my chin) who has achieved straight A’s only a few times.  It has taken years of unlearning to refurbish my self-regard into a healthy balance of respect, confidence and the willingness to admit mistakes in a nourishing way. I love how God keeps revealing things to me.  That day in the labyrinth He showed me how we can be loved imperfectly by those who love us the most, but it’s His love that is truly perfect and never disappoints.

This labyrinth experience closed the gap between God and myself. He is much closer these days.  As a result of my new-found intimacy with Him, I can honestly picture myself under His soft, protective wing, nestled in His red, velvet lap, or sitting at His feet enfolded in the train of His robe.  My identity is who He says I am.  I am His child who He loves, who He chose, and who He holds tight with joy and delight.  Most importantly, He is no longer the far away Heavenly Father, instead, He is my Abba Father.  My God who wants to be intimately known and who wants to intimately know me – mess and all.
PONDER
What did you see, or feel when asked to picture God?
Think of the people or circumstances that have impacted your identity.  In what ways has it impacted how you see God?
On a scale of 1 – 10 how intimate would you say your relationship is with God, the Father?
WITNESS
Self-regard is an important aspect of our identity.  God’s regard makes our self-regard a powerful force.  How do you think God sees you, and how does the Bible support that? Who in your life demonstrates a healthy self-regard, and what does that look like?
ACTION
Self-compassion is a skill that bolsters self-regard, and strengthens your identity.
1)      What ways can you be more self-compassionate?
a.       Administer this tonic daily.
i.      5 Strategies for Self-Compassion
2)      Meditate on this Scripture: You are precious in my eyes, and honored, and I love you. (Isaiah 43:4a).
3)      If you are able to experience a labyrinth, I highly recommend it!
RESOURCE
SELF-REGARD
Self-regard is a critical emotional intelligence competency related to identity.  Individuals with a healthy self-regard respect themselves and accept both personal strengths and limitations while remaining satisfied and self-secure.
SELF-COMPASSION
Self-compassion is extending compassion to one’s self in instances of perceived inadequacy, failure, or general suffering. According to Kristin Neff, Associate Professor Human Development and Culture, Educational Psychology Department, University of Texas at Austin, self-compassion is composed of three main components – self-kindness, common humanity, and mindfulness.
As a certified Christian Life Coach I can help you move from where you are to where God wants you to be. If you are interested in creating awareness and strength in your identity then let’s chat. I’d love to be your champion in what God is calling you to do!
#Karynisms #CoachKaryn #EQandJesus #identity #selfcompassion #selfregard #emotionalintelligence #EI #EQ