I distinctly remember the call when it came in. The surprising, lopsided, and inconceivable call that ruffled my feathers. Ten years ago, I was mindlessly shopping at an Office Depot in Chicago after a long day at work. As I was tiredly hanging on to my shopping cart and shuffling through the store, a call rang in from my friend, the Associate Pastor of my church. My initial curiosity fizzled into bitterness when he asked me to be a mentor for someone.

Doesn’t sound like a normal response to that question, right?  I’ll admit that, but for years before that call came through, I had asked and hoped for a mentor for myself. Somewhere deep down inside I had hoped he would be making calls for me, not to me. It’s embarrassing to admit that a casual, kind call, made on the behalf of someone else and meant to flatter me, would evoke such a strong response, but it did.

Years before, a question in a Bible Study asked about the mentor in our life. I thought it was presumptuous to think that everyone would have had that experience, and felt the first pangs of rejection in this arena. So, I hope you can see that the phone call that began with bright curiosity, disintegrated fast once he asked me that question. It had dredged up years of hurt from the erroneous belief that I was odd, overlooked, and unworthy to be mentored. I’m grateful, now, that I have grown into a better understanding of myself, but before then this was a raw button…which my nice friend had unknowingly pushed.

My shopping cart crawl through the store halted. I couldn’t get over how they would consider an unmentored, haphazardly-formed Christian like me.  My reply to his invitation was an immediate and curt, “Sorry, I’ve never been mentored and don’t know how to mentor someone.”  My response was laced with blame and, I confess, it was on purpose.

He persisted gently, “That’s okay, I think the two of you would hit it off.”

I balked again, “No. Sorry, I’m not comfortable.”

Again, he persisted kindly, “Just be yourself, that’s all we’re asking.”

Without knowing who he had in mind for me to mentor, I asked incredulously, “Does she know who you’re asking?”  Surely anyone in their right mind wouldn’t want to be led by someone who didn’t know what she was doing!  I didn’t grow up in the church, I didn’t go to Sunday school, I didn’t come from a family who lived a lifestyle of faith. No…I learned about Jesus sideways, through my incidental appearances in the Catholic church, then I was swept into the New Age movement in the 80s. It wasn’t until I was married that I started reading the Bible and attending an edifying and equipping, church. Surely no one wanted whatever was the result of all of that!

“Yes, she does,” He replied, maintaining his good nature, even after my sharp responses.

I shared my heart with him, and in the end, he moved me from sour feelings to a more open spirit. He was very clear that they just wanted me to be me, and to let the relationship play out; so, I relented. I agreed to initially meet the mentee and figured I’d let her know, right off the bat, that I was not qualified to be a mentor. I was expecting it to be short-lived. 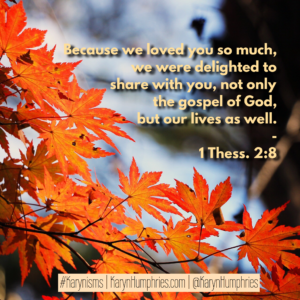 I can barely remember our first meeting because it was so natural to be with my sweet mentee. She didn’t care in the least that I didn’t know what I was doing, she was happy with the prospect of growing in a new way!  We happened to be very much alike and had similar spiritual intensities, which made for engaging interactions. My life journey was a bit further down the road than hers, which is, in essence, the core value of this type of mentoring.

I somehow figured out how to do the mentoring thing because we spent five years together before I moved to Nashville, TN. I couldn’t tell you what I did, or how I did it…I guess I was just myself, she was just herself, and we always invited Jesus. Through these years we climbed emotional mountains and walked tragic valleys together. God showed up BIG, and to this day I have an altar of remembrance, in my heart, for what He did in this relationship. It may not have started well (on my end), but both our souls are better because we witnessed God in our midst; loving us through each other.

A few years ago, in a leadership training, they asked the question, “What would you tell your 17-year-old self?” The answer sprang to mind, as if waiting for years to be unleashed; it was to unrelentingly find a mentor. While I never found a personal mentor, I did find versions of mentoring that were also valuable. I had the best peer mentoring experience with other women walking out their Jesus walk too. This crew of incredible women, who loved God and others, were members of my Thursday night prayer group. We stayed together for 11 years, and during the hardest years of my life, they were the best part.

These journeys are not meant to be made alone. Scripture provides rich instruction of its benefits. I can’t encourage you enough to take your imperfect self and find someone who is walking out their Jesus walk too; someone who is willing to share their perspective from where they are on that same path. 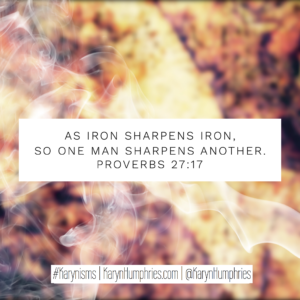 Some pairings may not work, and that’s okay, but that doesn’t mean you need to stop looking. The woman I wanted to mentor me didn’t have the time, and years later I find that that happens to be my own struggle. I just can’t mentor everyone I want. However, even though she couldn’t mentor me, I still watched her life, I still learned from her, and because we were serving at retreats together, I got to know her in special ways. God did not leave me in a lurch. He covered me with His Spirit and surrounded me with believers that were authentic and growing. Let me say that again…they were authentic and growing and that’s ultimately what you want!

Almost 10 years later, I have become involved with a mentoring program called the Oak Project. They have a holistic mentoring format for young Christian business leaders. It’s the Biblical principle of pouring yourself into another for the good of the Body of Christ.

So, as I head into my second year with the Oak Project, I look forward to the sharing, and growing, and the care the Holy Spirit will extend to me and my two mentees. I chose to become who I needed in my life all those years ago, and because of the Holy Spirit, I didn’t need any special knowledge, format, or qualifications. I was just me, authentic and growing, and you know what? God’s grace abounded!

Mentoring has been a rich experience for me and I believe it’s one of the key ways we are to be the church to each other, but allow me to take a hard left here and explain the differences between mentoring and life coaching.  I feel compelled to do this because as a life coach I find that many people confuse what I do.  It’s easy to see how this happens because we generally don’t use the terms mentoring and coaching in clear cut ways. One is not better than the other, but they each have their own nuances and different outcomes:

deals mostly with succession training and seeks to help someone do what the mentor does.

deals mostly with a person’s present and seeks to guide him or her into a more desirable future.*

It’s not uncommon for us to confuse the two, but depending on what you’re looking to achieve, it’s helpful to know the difference. Mentoring seeks to replicate the mentor; that’s where the “just be yourself” piece comes in. Christian coaching helps move people from where they are to where God wants them to be. 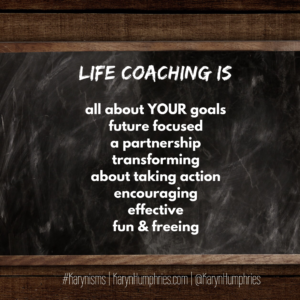 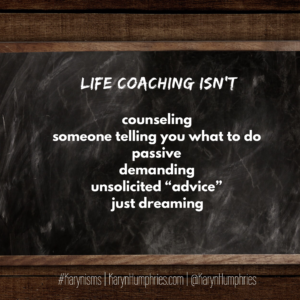 In mentoring I get more space to share about myself, but in coaching I’m skilled in helping others achieve their own goals.  Both are fun, and both are a privilege, but both have a different process and result.

As a mentor I am honored to be able to be the person I wanted when I was a new believer. And, you’ll be happy to know that in retrospect, while I never had a one-on-one mentoring relationship, my attitude got a lot better. God worked in the gap and I’m eternally grateful.

If you can’t find a mentor, find a community of believers that you can pull together in a group to meet regularly with, and to walk beside. It worked for me, and I know the Holy Spirit isn’t limited by any hurdle, He can love us in ways we never even imagined. So, go!  And, if you are looking for a pathway that requires a life coach’s qualifications, I’m here, in heart and in hand, for you.

2 Timothy 2:2
2 You have heard me teach things that have been confirmed by many reliable witnesses. Now teach these truths to other trustworthy people who will be able to pass them on to others.

Proverbs 27:17
As iron sharpens iron, so one man sharpens another.

Titus 2:3-4
Likewise, teach the older women to be reverent in the way they live, not to be slanderers or addicted to much wine, but to teach what is good. Then they can train the younger women…

Psalm 71:18
Even when I am old and gray, do not forsake me, O God, till I declare your power to the next generation…

1 Thessalonians 2:8
Because we loved you so much, we were delighted to share with you not only the gospel of God but our lives as well.

Proverbs 13:20
He who walks with the wise grows wise, but a companion of fools suffers harm.

Proverbs 1:5
Let the wise listen and add to their learning, and let the discerning get guidance.

As a Christian Life Coach, I can help you move from where you are to where God wants you to be. If you are interested in growing more as a disciple and/or expanding your emotional intelligence, then let’s chat. I’d love to be your champion in what God is calling you to do!