Imagine you are twelve years old again; you just moved into a new neighborhood and your mother drives you up to a brown, brick house.  She stops the car, tells you to ring the doorbell and make a friend.  You muster everything you’ve got to shuffle your way up the stairs of the Chicago bungalow, ring the doorbell and wait anxiously.  As soon as the door is answered, your mother drives away and all you’re left with is a nervous smile and a hello.

Shocking, right?  Terrifying to most people, but especially traumatic for a chubby, introverted, middle-school girl.  Well, allow me to introduce you to my courageous friend Kathy. This heavy-set, freckled faced, blue-eyed girl had fulfilled her mission that day to make a friend, and it turned into a bond that lasted a lifetime.  Today I testify as a witness to her faith in a life-long struggle with addiction, anorexia and depression; the trifecta of oppression.

Kathy’s struggle with alcohol began very early. She started to drink in her teens and it had escalated by college. Having witnessed family members deteriorate with this disease, she knew what road she would be headed down, so at 22 she admitted herself into a rehab program.

During this time she worked at losing weight. When she began to successfully manage the drinking, my sober, overweight friend drifted into the world of anorexia/bulimia.  Through the years this disease ravaged her body: her teeth decayed, her hair fell out, her skin split at her fingertips and her body didn’t have enough fat to menstruate.  Starvation isn’t pretty.  At one time, after complications from gallbladder surgery, her body weight dropped to 72 lbs.  She endured a stroke, heart problems, and memory loss from that incident.  It was frightening to me because that was the first time I had seen the face of death on someone still alive.

Kathy also battled with chronic depression and occasional suicidal thoughts.  She spent years under the care of medical and mental health professionals who were mostly clueless about how to eradicate it, but were able to manage it.  Her medical doctor put her on a TPN (IV nutrition therapy) with a central line that bypassed her stomach in order to keep her weight from dipping under 90 lbs. I lost count of how many times she did this, but it is what kept her body going in such a way that you’d never know she was debilitated.  What kept her spirit going, though, is the real story here. 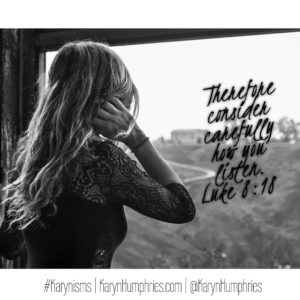 Kathy was a smart, generous, loving friend that cared more about everyone else than she did herself.  Her biggest gift was that she was thoughtful and wise; her greatest curse was that she was thoughtful and unwise.  She had wisdom when it came to investments and figuring out the most economical way to do anything, but she wasn’t wise enough to navigate around theembedded lies that said she wasn’t enough, worthy or valuable.

While all of us wrestle with these thoughts on some level, Kathy was crippled by them.  Years of telling her otherwise was fruitless.  No matter how much I, or anyone else tried to combat the lies in her head with words of truth, the effort was impotent against the disease that spoke louder. That disease didn’t allow her to see the beautiful child of God that Jesus saw. Believing badly mutes God’s voice.  Kathy heard “no good”, “disappointing” and “worthless” when God was really saying “worthy”, “loved”, “beloved”, and “delighted in”!

The lies that Kathy believed not only caused emotional pain, but also physical pain.  She told me she’d wake up every morning and say, “Crap!” because she was still alive.  I challenged her one day, and asked why she was still here, why didn’t she just end her life?  She told me that was out of the question, because underneath the din of the obnoxious lies that she battled every day, she heard a small voice that told her to keep hanging on.  She knew that small voice to be God, and even though it was a whisper, it was strong enough to make her endure complications from all the TPN’s and incredible pain in her shoulder and legs. 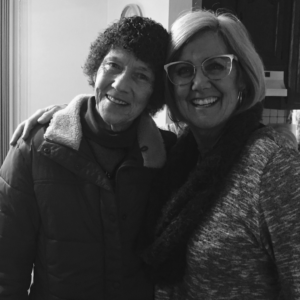 As different as our lives were, Kathy and I shared a devotion for God that shaped our faith.  I’ve gotta tell ya – she walked out some serious faith!  She fought the demons that oppressed her joy, and robbed her of her health, because she heard a small voice that she knew was God telling her to hang in there.  When medical professionals didn’t know what to do with a 40-year-old anorexic woman, (because no one had ever lived that long) my dear friend who heard the small voice of God, lived until the age of 56.  If the power of God’s voice at such a low volume could do that for Kathy, how much more do I need to obey when I hear Him speak love and truth to me every day?

In the midst of pain and emotional oppression, she lived a fruitful and productive life that loved, a life that gave and sometimes a life that knew better (and she’d pointedly let you know that, because she loved you).  She strived to be loved, but she never fully experienced that even though everyone in her life loved her dearly.  Recently, after another battle with a TPN infection, her body succumbed to death, but not because she dictated it, but because she followed the small voice of God that called her home.  She is now face-to-face with Jesus, standing in the perfect truth of her worth, in peace and out of pain.

Sadly, belief does not spare us from the battle. The one thought that she knew in her head, but never permeated her heart, was that she didn’t have to do anything to be loved by God.  He already loved her, that’s why He sent His only Son, Jesus to die on the cross for her.  My dearest friend was a daughter of the King, who was robbed of an abundant life by powerful lies.  The most helpless I’d ever felt in my life was trying to convince her of that.  While I miss her dearly, I am comforted that her belief in Jesus has brought her into the light of eternity where I know I will one day see her again. 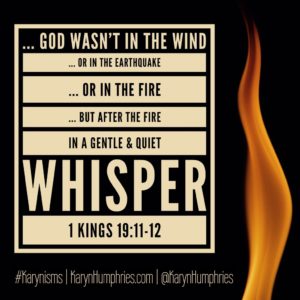 Kathy’s earthly life was a battle that was fought by a heart that was bigger than her body and a faith that obeyed.  She demonstrated what happens when God’s whisper meets our love.  I’m so blessed to have shared decades with her and am indebted to the brave little girl that knocked on my door all those years ago.

What are all the ways you hear God?
On a scale of 1 to 10, how well do you take captive every thought and challenge it against God’s truth?

How do others see you obeying God’s voice or guidance?

1 Kings 19:11-14 (MSG)
11-12 Then Elijah was told, “Go, stand on the mountain at attention before God. God will pass by.”
A hurricane wind ripped through the mountains and shattered the rocks before God, but God wasn’t to be found in the wind; after the wind an earthquake, but God wasn’t in the earthquake; and after the earthquake fire, but God wasn’t in the fire; and after the fire a gentle and quiet whisper.
13-14 When Elijah heard the quiet voice, he muffled his face with his great cloak, went to the mouth of the cave, and stood there. A quiet voice asked, “So Elijah, now tell me, what are you doing here?”
Luke 8:18
18 Therefore consider carefully how you listen. Whoever has will be given more; whoever does not have, even what they think they have will be taken from them.”
John 15:4
Remain in Me and I will remain in you.
Romans 12:2
Do not conform to the pattern of this world, but be transformed by the renewing of your mind. Then you will be able to test and approve what God’s will is—his good, pleasing and perfect will.
As a certified Christian Life Coach I can help you move from where you are to where God wants you to be. If you are interested in  getting clarity on what you’re hearing from God, then let’s chat. I’d love to be your champion in what God is calling you to do!
#Karynisms #EQandJesus #anoreia #bulimia #BFF #EQCoachKaryn #stillsmallvoice #gentlewhisper #CoachKaryn